Maya Angelou and Sally Ride Will Be First Women on U.S. Quarters Coming in 2022

Susan B. Anthony dollar or the Sacagawea dollar (which largely replaced it). If you've payed close attention to American coinage, you may have also spotted Helen Keller on the Alabama State Quarter. However, these are the only three women on American coins—or on any American legal tender produced today. Thankfully, the American Women Quarters Program is set to change that. The program will create 20 new quarter designs featuring pioneering American women of the past. The quarters will be released by the U.S. Mint in stages over the next four years.

The American Women Quarters Program will run from 2022 to 2025, with five new quarters released nationwide each year. Two of the famous faces to be seen in 2022 have already been announced, although their designs are still in a preliminary phase. The legendary women to be honored are Maya Angelou and Sally Ride. A poet and civil rights activist, Dr. Angelou passed away in 2014. She was a prolific writer best known for her work I Know Why the Caged Bird Sings (1969) and awarded a Presidential Medal of Freedom in 2010. Imagery from this work appears in the preliminary design of her quarter. Over her lifetime, Angelou received over 50 honorary degrees and even spoke at President Clinton's 1993 Inauguration.

Astronaut Sally Ride will be representing women in STEM on a 2022 quarter. Dr. Ride held a PhD in physics from Stanford University. She was a member of the first NASA class of astronauts to select women in 1978. In 1983, she became the first American woman in space (and third woman globally) on a flight of the Space Shuttle Challenger. To this day, she remains the youngest American astronaut to have been to space at 32 years old. She is also the earliest astronaut recognized as LGBTQ+. Ride has also been inducted into the National Women's Hall of Fame. Her quarter will feature references to her time in space.

The women to be featured will include individuals of diverse backgrounds and contributions to American society. All honorees must be deceased. Though only two of the 20 women to be honored have so far been announced by the U.S. Mint, there is a google form to submit your recommendations for the other 18 to be considered by Secretary of the Treasury, Janet Yellen, alongside representatives from the Smithsonian Institution’s American Women’s History Initiative, the National Women’s History Museum, and the Congressional Bipartisan Women’s Caucus.

As exciting a development as it is, many women and communities of color are left wondering where they are to be found among depictions on American legal tender. While some women did appear on antique bills before the founding of the modern national mint system, at present, no woman or person of color appears on modern American paper currency. An exciting decision to place Harriet Tubman on the $10 bill was announced in 2015 as part of a movement by the Treasury to include a handful of pioneering American women on paper money. However, this plan was amended to the $20 bill after the success of Hamilton, the musical about the current face of the $10 bill. The plan—which was supposed to go into effect in 2020—was then pushed to 2028 by the Trump administration in a decision believed to be in part due to the former president's well-documented love of Andrew Jackson (who appears on the bill). The move frustrated many, as Tubman was to be the first woman and Black American honored with a depiction on current paper currency—replacing the slaveholding Jackson.

To submit your ideas for the American Women Quarters Program, use this form. To stay up to date on the fight for representation and the honoring of the achievements of women and communities of color, check out the organization WomenOn20s.

20 pioneering American women of diverse backgrounds will be featured on nationwide U.S. Mint quarters through the American Women Quarters Program. 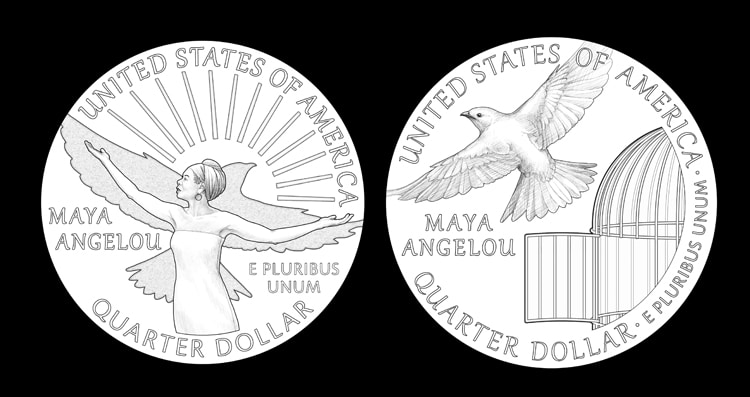 Some of the potential designs for Maya Angelou's quarter. (Photo: U.S. Mint)

Sally Ride and Maya Angelou are two of the famous faces who will appear on coins in 2022. 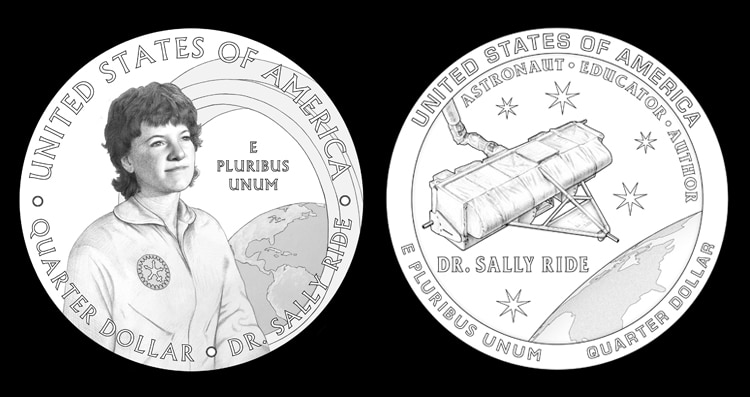